New Hampshire’s White Mountains draw complaints from many Appalachian Trail thru-hikers, but attract legions of walkers seeking to enjoy the sights and challenges of day hikes. Known for its rugged, steep terrain, the area has been our home for six days as we climbed and descended five trails, leaving many more for next time.

The highest peak in the Northeast, Mount Washington offers more than 4,500 feet of ascent from its base and three ways to get to its 6,288-foot peak: on foot, on the cog railway, and by car. The climb was intimidating and the price tag of the train was too high, so Sue and I opted to drive our truck for $53—a fourth the cost of the train. It was a perfect day for 100-mile views after we squeezed by descending vehicles on the harrowingly narrow, cliffside road.

Later, at Mount Washington’s eastern foot, we popped into the Pinkham Notch Visitor’s Center, the starting point for the Tuckerman Ravine trail to the top of Mount Washington. From a network of paths, we took the Liebskind’s Loop, which overlaps part of the Appalachian Trail and lifted us high enough for a spectacular view from Brad’s Bluff, still well below Mount Washington’s peak. Mount Washington also holds the record for the highest wind speed ever recorded: 231 miles per hour, in 1934.

Northern New Hampshire and the Whites offer a host of trails, including paths to many of the peaks in the area. The difficult terrain kept us from trying the longer and more challenging routes. We chatted with an AT thru hiker who had diverted from the AT to the Mount Washington peak.

“How are the Whites treating you?” I asked him.

He rolled his eyes. ”When I look behind me, I can’t believe what I climbed. This (Mount Washington) was actually easier than most of the others.” 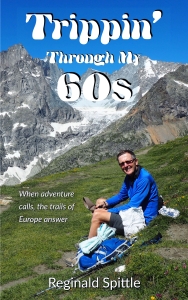